Thantos DuBaer was the main Antagonist of Twitches and Twitches Two. He is the uncle of Alex, and Camryn. He was also the elder brother of Aron DuBaer.

Thantos is a powerful wizard who owns a multi-million dollar corporation and has power in both the human world and Coventry. Jealous of the power the twins held, he attempted to kill them several times following their father's death and removal to the human world, but failed each time. He asks Miranda to marry him towards the series' end but she refuses. As punishment for his treatment of the twins, he is ignored by everyone in Conventry for the remainder of his life. He was, at one time, involved with Beatrice Hazelitt, and had a daughter, Ileana, who he abandoned.

He is the so-called Darkness, which has been besieging Coventry. He kills his brother in this form and attempts to kill his newborn nieces, but fails due to the powerful magic they hold. Following the twins being taken and assumed dead, he marries Miranda, and becomes King of Coventry. When the twins' location is discovered, he appears as the Darkness once again and attempts to kill them. However, their combined magic proves too much for him and he is destroyed.

However, it is discovered he is not really dead, his spirit is in the Shadowlands, along with Aron's, whose spirit was really in Mrs. Norseng's shadow. Alex accidentally brings him back while attempting to bring her father, and he attempts to destroy his brother once and for all. However, Miranda and the twins manage to confront him and bring back Aron, who defeats him once and for all. 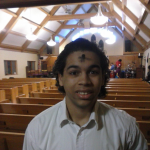